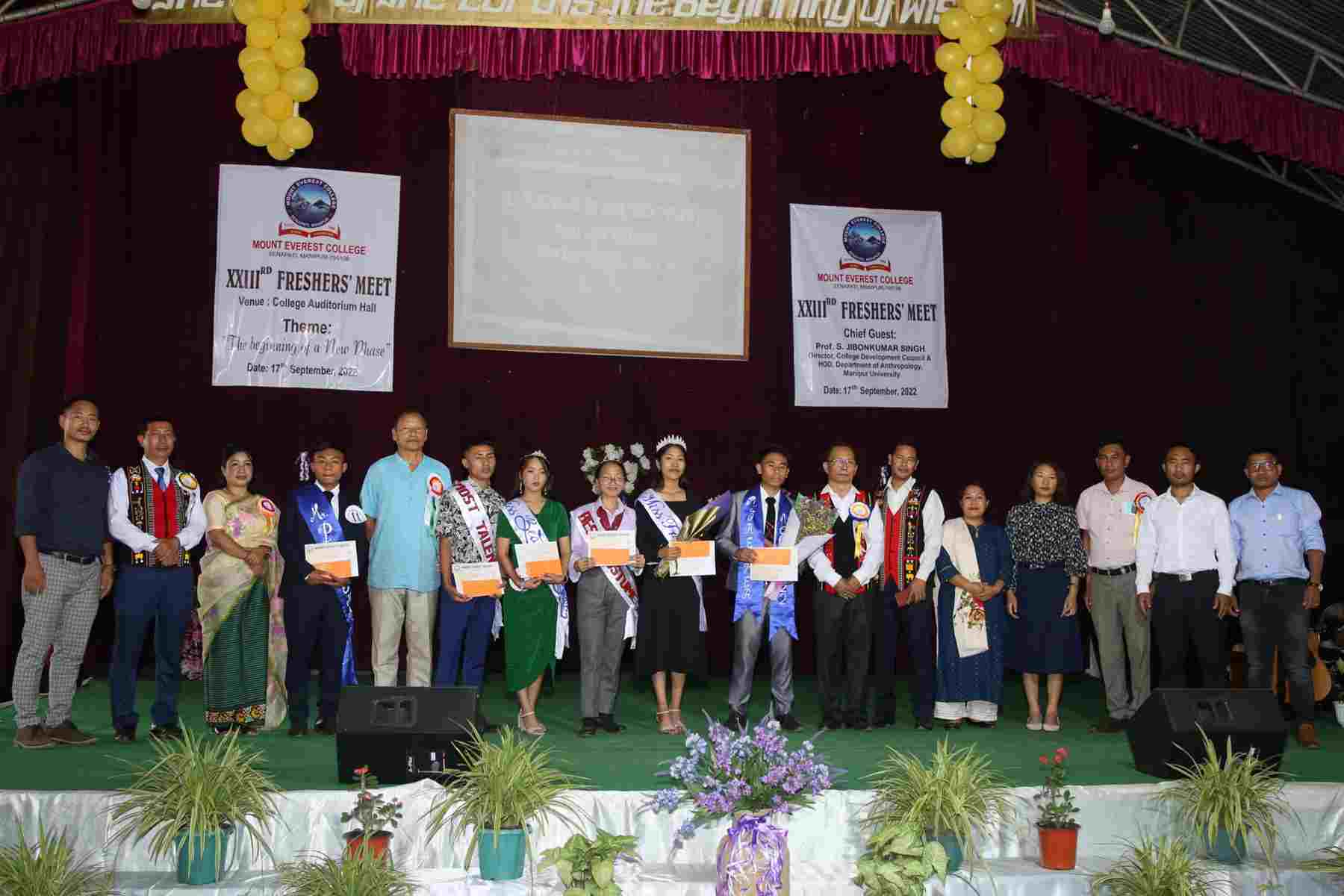 The Mount Everest College, Senapati Manipur conducted its XXIIIrd Fresher’s Social under the Theme: “The Beginning of a New Phase”, on the 17th of September 2022 at the college auditorium as part of the academic activity. The function was graced by Prof. S. Jibonkumar Singh, Director, College Development Council & HOD, Department of Anthropology, Manipur University as the chief guest.

Mr. Dziipazho of B.Com., V-Sem and Ms. Jennifer Sasah of B.A. V-Sem co-hosted the programme. The programme was conducted under two sessions. The first session started with a welcome song from Commerce Department followed by a prayer of grace from Mr. S.P. Simeon, Chaplain, MEC, which was followed by lighting of the lamp by the Chief Guest where he was accompanied by VP and President.

Shri. Gonmei Meithuanlungpao Acting Principal, MEC delivered a short welcome note where he introduced the chief guest and stated that God has answered their prayer and blessed the college with students who are different from everything and unique from each other in all aspects to be part of the college. The speech was followed by a special song from Ms. Rojohne Vemai, B.Sc. III-Sem.

Thereafter, Round 1 for self-introduction of the freshers was done where more than 200 freshmen of different capacities and talents introduced themselves. The self-introduction was followed by Kuki Cultural Dance Troupe which was followed by speech from the chief guest. Speaking as the chief guest, Prof. Jibonkumar Singh stated that Mount Everest is known as the tallest and highest peak in the world. Similarly, the professor asks the students to be the tallest and highest with respect to their status, occupation and ambition. Every parent likes their children to be taller than themselves or be more prosperous, more respectful and give more contributions to the society. Likewise every teacher too wants their students to be higher than themselves.

He also further stated that Mount Everest College is one of the best colleges in Manipur which is why the University has granted permission to open M.A. courses in History, Political Science, English and Sociology with an intake capacity of 35 seats in each department. The professor is also sure that the product of the college would shine because; all the faculty members of the college are very competent and qualified. Advising the young learners, the professor stated that other than professional courses that are not available in the state, it’s for the best that they stay and complete their studies in Manipur as the educational institutions in the state are equally good with that of the outside.

After the speech, Ms. Savane Vemai, B.A. V-Sem delivered a short speech on behalf of the old timer which was followed by a dance form the Department of Commerce III-Semester. B.Sc. V-Sem performed a Bollywood Dance which was followed by Round-2 i.e, Talent show. After the talent show, Speech on behalf of the fresher’s was delivered by Mr. Mark Thoitak, B.A. I-Sem. The second round ended with Couple Show from B.A. III-Sem.

The programme was concluded with a vote of thanks from Mrs. Kokko Ringkangmai Asst. Prof. Department of English, MEC and a benediction from Mr. Jenkins Kongkongho, Students Facilitator, MEC.